I had a seminar at Double D's Performance Shop in Scottsdale, AZ a couple of weeks back and had the pleasure of meeting Myk Bates and Weston Young of OTB Prototypes, which is the manufacture of the VooDoo A/C for the Indian motorcycle.

I loaded up a FM tune for his motorcycle using the PVCX and discussed the gains that he is seeing with his VooDoo  A/C.  After capturing a few logs, it looked like there were measurable increases in air flow through the engine in direct response to this A/C.  Mike offered to send me a unit to test, which I agreed to do.

There is a lot of "snake oil" performance parts on the market, though I did see an increase in fuel trims on Mike and Weston's bikes, I was still a little apprehensive on qualifying numbers and gave some thought of a good test strategy to validate any performance gains (or loss for that matter).  Since my bike is tuned in just about perfect over the full operating range with my Performance Machine A/C on it, I thought perhaps a direct switch then retune would be a good first test.

A little background is in order.  I chose the Performance Machine A/C because it performs as well as the Indian Stage 1 filter, I was able to get it at a good price from my Dealer, and I liked the looks of it.   I was a little reluctant to take it off and install the VooDoo, because I did not think I would see a big increase in performance with the VooDoo, in fact I was concerned it would be hard to qualify.  But I agreed to do it so off it went. 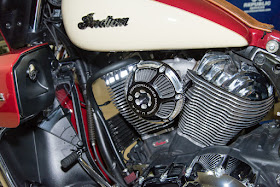 I will be posting the results when all my tests are complete, but this test resulted in an increase of 3 to 5% in VE table at and above 3k RPM.  This indicated that the VooDoo does flow more freer than the PM A/C starting in the power band range.  This is a good increase for my TS111 engine and I imagine it would be greater on the 116" Stage 3 kit.

I removed my PM A/C and then opened up the VooDoo package Myk sent me.   I asked for the all black option because I thought it would best complement my bike.

It was packed well.  The looks are unique and stunning! 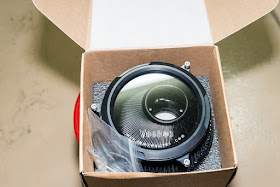 This A/C is thick and beefy.  It is a well made machined A/C housing. 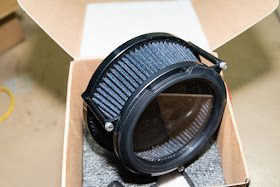 The first thing to do is remove the Air Box and Throttle Body, the Service Manual details this procedure.   Re-nstall the Air Box Bracket and rear mounting brackets for the VooDoo Air Box using the four bolts and torque to 88 in-lbs. 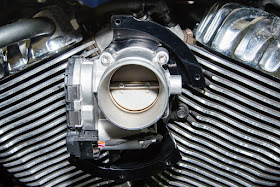 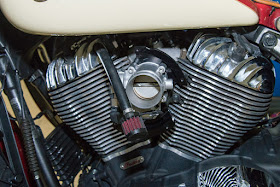 One note, if you mount it as designed with the VooDoo A/C, the OEM vent hose simply hooks to the back of the VooDoo A/C bracket and vents to the atmosphere.  Below shows the vent line going up into the frame where the air duct is located. 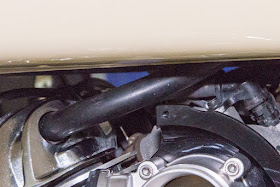 Here is a photo of the backing plate installed.  For some reason I failed to take a photo of my installation, so I used one that Myk has sent me.  Mine is black, this one is red, which shows off another color scheme available.  I believe it comes in Black, Chrome, and Red at this point. 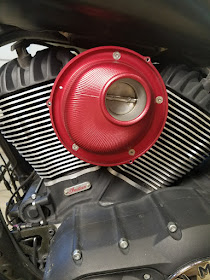 The filter and outer housing go on next completing the installations.  The whole process took less then an hour to perform the complete. 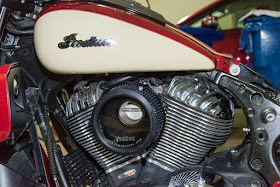 The filter looks good head on as well as from above.  It does not stick out too far, about the same as the PM filter (perhaps less)  The filter has a large surface area and really flows nicely. 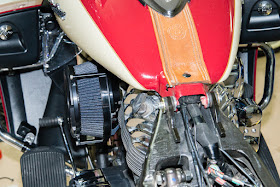 I will update this page as the data from tuning is finalized.  My initial thoughts are this A/C is very nice workmanship and performs well! The bike is more responsive in acceleration compared to the Performance Machine A/C.  In fact, most of the time, there is very little difference between one high performance A/C and another, but the VooDoo is not the norm.  Initial data from the Power Vision  CX logs as well as tune shows it calls for significantly more fuel over 3,000 RPMs and under a load.  This is the perfect Air Intake for motors 110 ci and above.